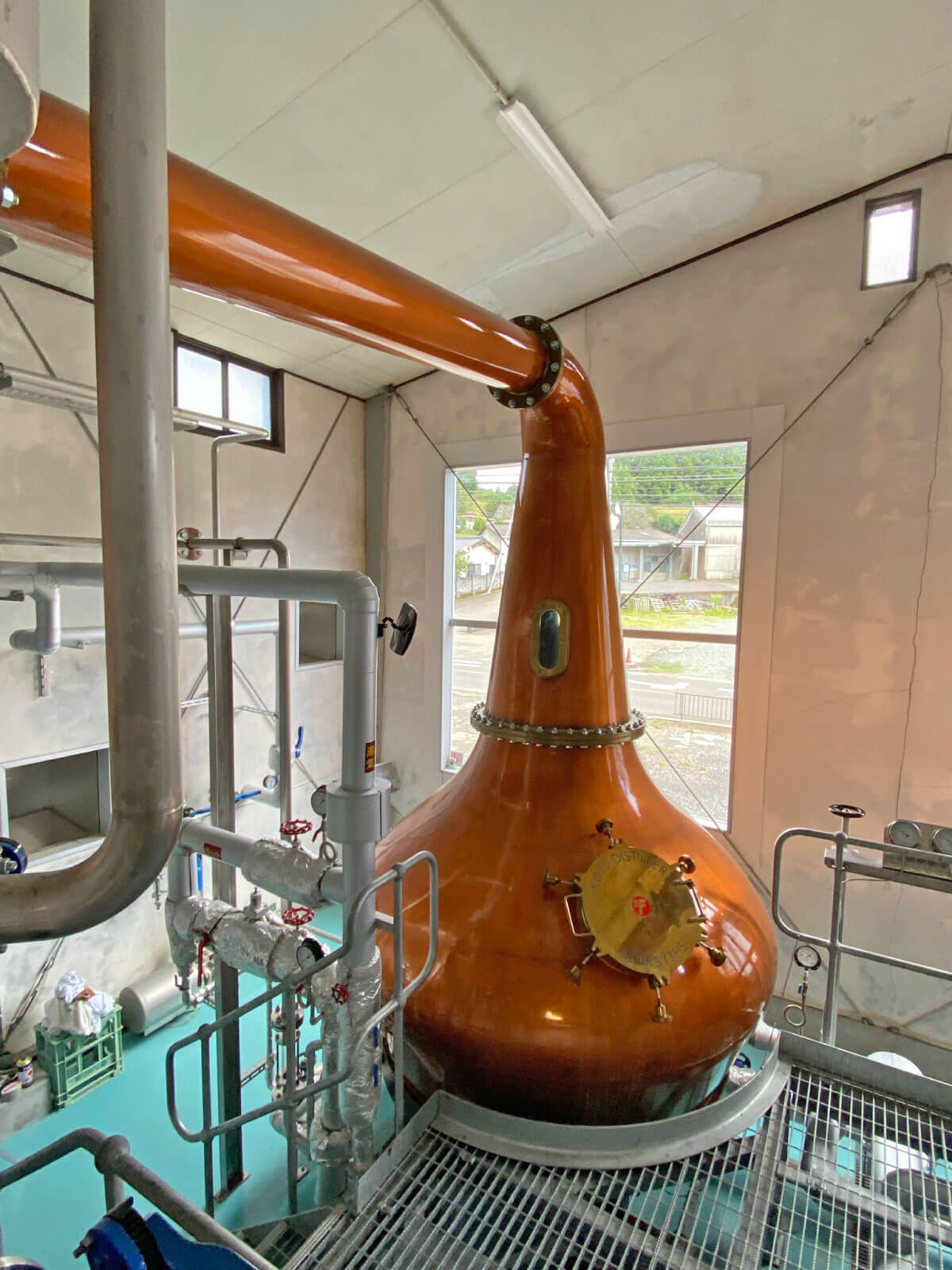 It all started with a very mysterious experience.
Shoji Utoda, the founder of the distillery, went to a bar with his friends during his college days.
And there he met a bottle.
Exactly it was Scotch single malt whisky and it shot him through.

He didn’t drink much originally,Except for whisky after that experience.
After that, he got a job at a liquor store that was a family business and started selling whisky.
Of course he believed that the charm of whisky was acceptable.
However, the reality was quite harsh, in 1998, whisky was a genre that could not be sold at all.

Still, he didn’t give up and continued to sell.
Of course, he kept procuring bottles that he thought were good. He continued to grow inventories, but he believed that one day they would all sell.
And as he continued to do so, one day he dreamed of making whisky with his own hands.
As he told many about his dream, many began to reach out to him.

In 2018, acquired the site of a sake brewery that was closed 30 years ago.

There was also spring water on this site.
He was convinced, “I might be able to make the ideal whiskey here!”

In Scotland, the townspeople will be pleased with the new distillery.
He wants to be the vitality of a small town called “Kusumi” where he was born and raised.
He believes it will be a tribute to this town. 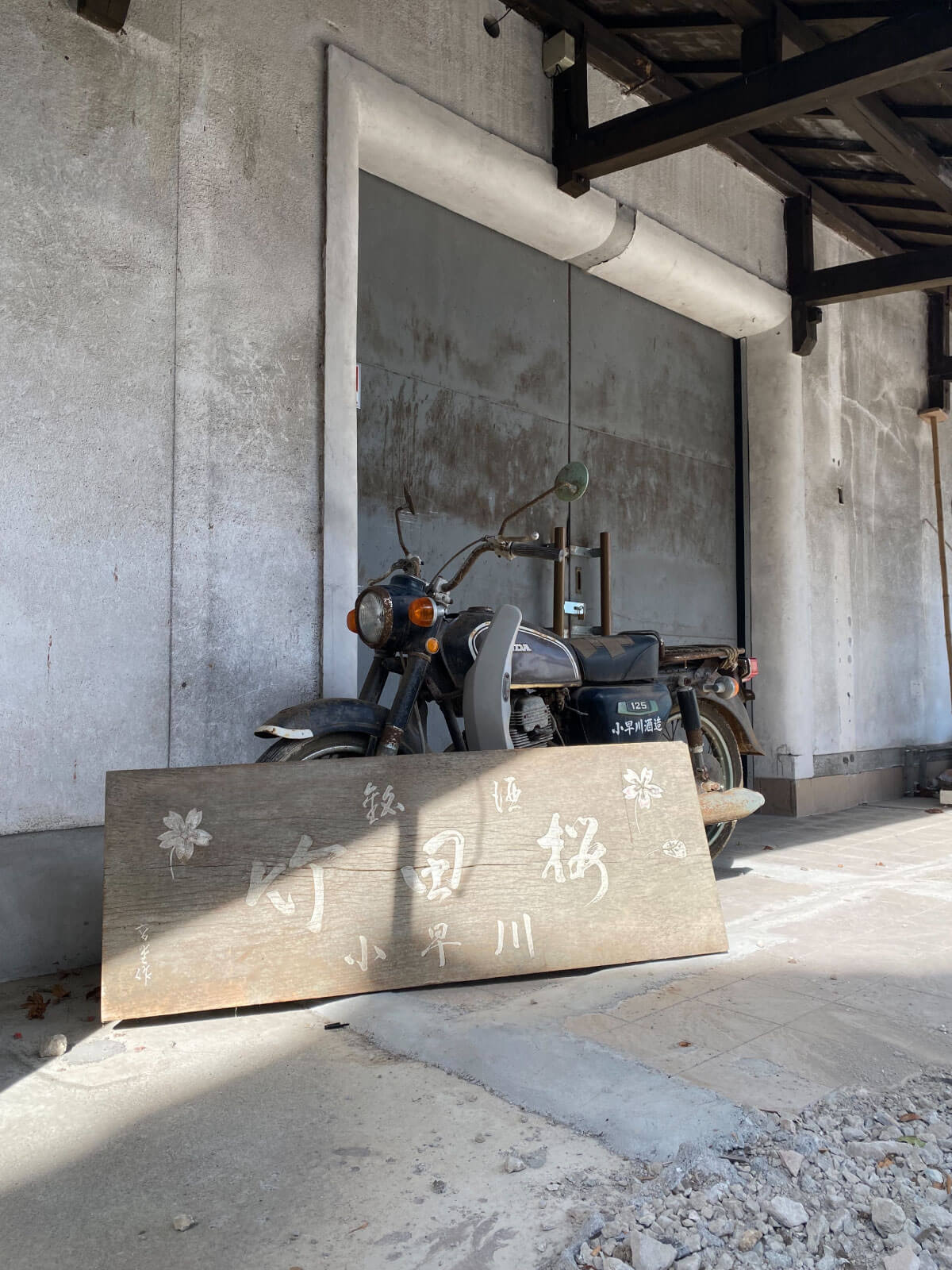 Originally a historic building where local celebrities have exhausted their luxury.
Large zelkova lumber is used abundantly in the main building, which was built in the Taisho era, and in the remote areas.

At this place, the sake brewery “Kobayakawa Shuzou” that was in operation until 1989.
This brewery has had transactions since the company was founded.

Time has passed and the land building has been desolate.
Sake brewing that once stopped 30 years ago.

While some of the buildings were damaged by the Kumamoto earthquake, the unscathed and enduring warehouse was a source of support.
Utoda was convinced that he should make whiskey again here.

Utoda prays to a small shrine on the site every morning and evening.
He has sincere prayers and gratitude.
It seems that the shrine is still watching and protecting the Kuju Distillery today. 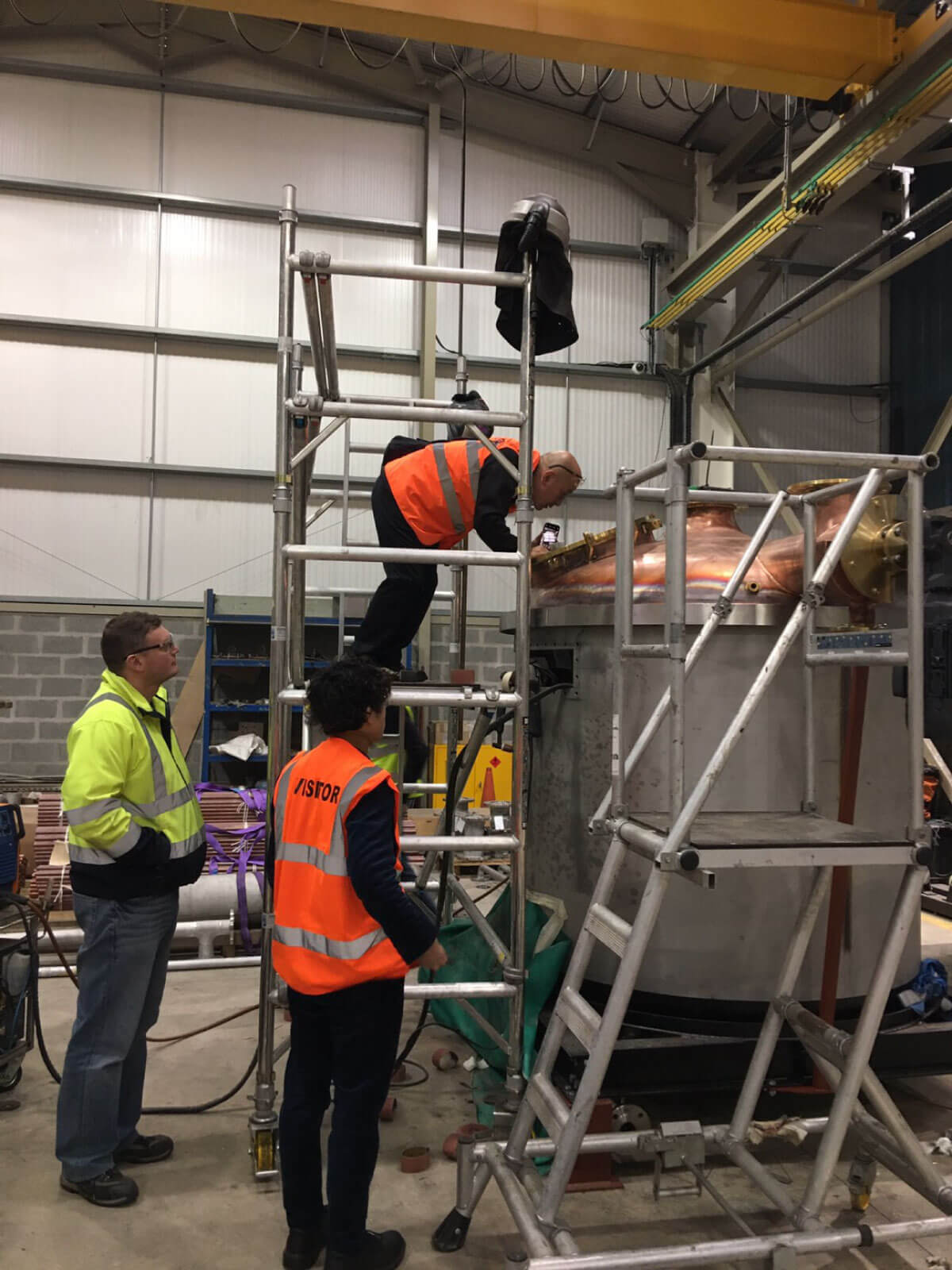 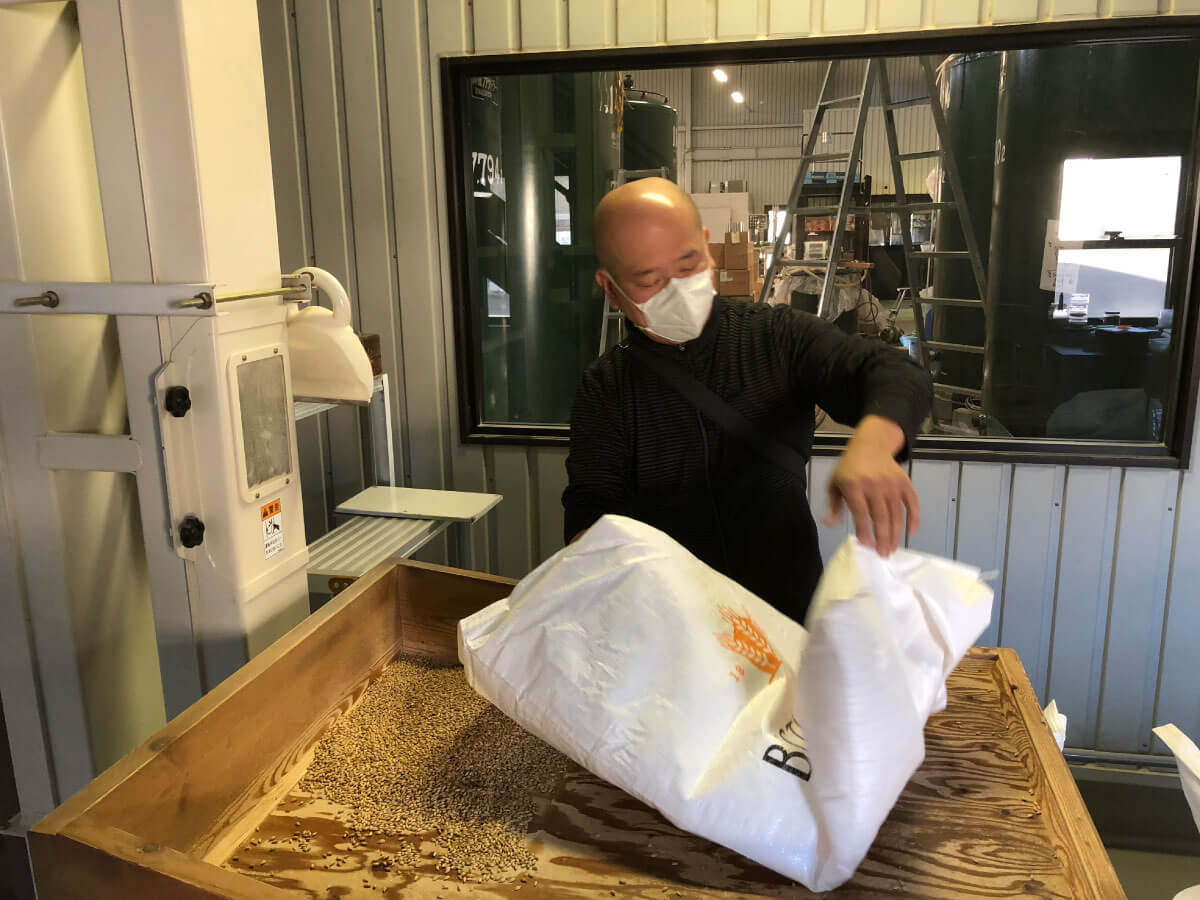 It was the Chichibu Distillery that accepted his training for manufacturing.
The training was fun and unavoidable.
He was delighted to make whisky with his own hands, he has never been so excited.

Takeishi, who is in charge of manufacturing, also received training at the Tsunuki Distillery of Hombo Shuzo Co., Ltd. in Kagoshima.
The experience of receiving technical training at both companies is a great asset.

The equipment was ordered from Forsyth, Scotland.
In the spring of 2020, when the setup was about to begin, the world was hit by a pandemic.
The project was in jeopardy.
Engineers who were supposed to build the equipment cannot come to Japan.
Utoda consulted with Hirano Shoten, which also handles equipment for a large local shochu and sake makers. Fortunately, they had experienced engineers.
Relying on the drawings from the person in charge at Forsyths,
They spent 10 hours every day for half a year to complete the setup.

These people support the whiskey making at the Kuju Distillery. 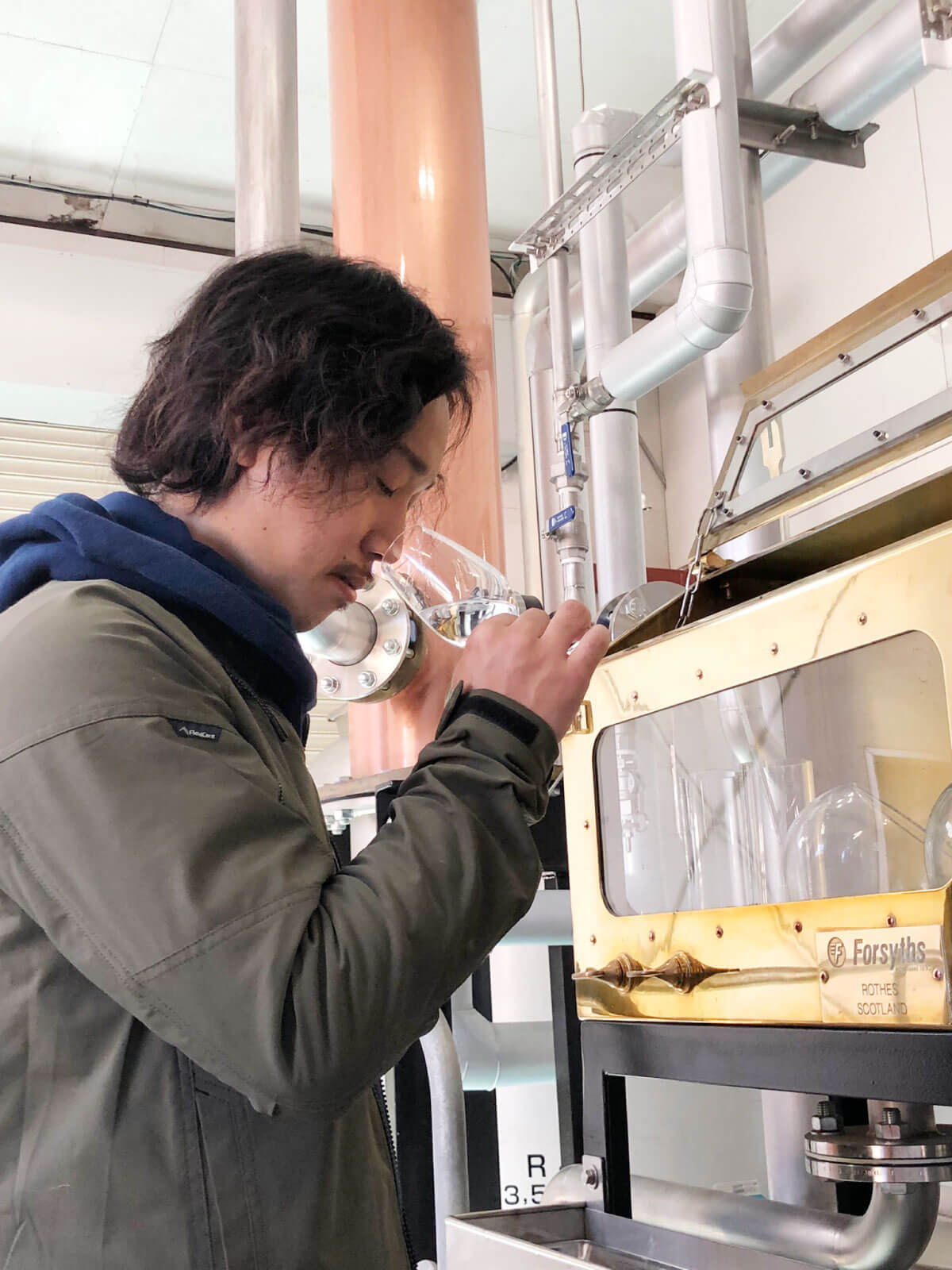 It is said that the world’s oldest whisky production began in the 12th century, and the current manufacturing method is almost established in the 18th century.
With the lessons of our predecessors in mind, we seriously face whiskey making.
That is what the Kuju Distillery values most.

However, if the equipment and location are different, the optimum whiskey making will be different.
Repeat trial and error every day. It’s not magic.
The spirit of inquiry is the driving force for whisky making.

We are all grateful to be able to make the whiskey we dreamed of, but one day we want to make a drop that is not embarrassing to those who have supported us.
Believing that it will be a gratitude, we will continue to work diligently on whiskey making today and 100 years from now.